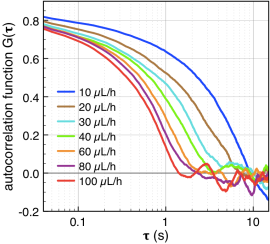 This paper reports on electrochemical autocorrelation spectroscopy as a technique to detect ultra-low liquid flow rates as well as to generally study transport of small amounts of molecules in a nanofluidic channel. The molecules undergo pronounced number fluctuations due to Brownian motion. We measure these fluctuations electrically using nanogap transducers embedded in the walls of a nanochannel. When liquid is driven through the channel, also the fluctuations are transported at the same velocity, which we detect by performing an autocorrelation analysis of current-time traces obtained at the detector. Thereby we are able to determine record-low flow rates below 1 pL/min.